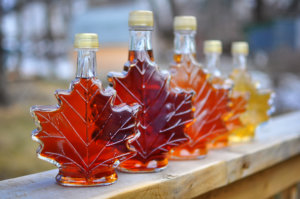 Canada is a leader in the production of this golden goodness, as it supplies about 71 per cent of the world market. Québec is by far the biggest producer in Canada—more than 90 per cent of Canada’s maple syrup comes from that province.

Quick fact: it takes almost 40 litres of raw maple sap to make one litre of syrup.

Indigenous people taught early Canadian settlers how to harvest sap, and boil it to make syrup. Maple sugar was the first kind of sugar produced in eastern North America. It remained the standard sweetener until 1875, when cane sugar became available.

Did you know? The world has a Global Strategic Maple Syrup Reserve? Yup, and it’s in Canada—a collection of warehouses that have stockpiled over 100 million pounds of maple syrup!